Measurement accuracy is the key: telecentric vs endocentric measurements

Precise results are the key factor of any optical measurement task. There are various ways to achieve them. In imaging metrology, telecentric lenses are often used for high-precision measurements.

Therefore, we would like to explain why this is the case and what possibilities are available even without telecentric optics. To understand what is possible, it is necessary to explain the special properties of telecentric lenses. 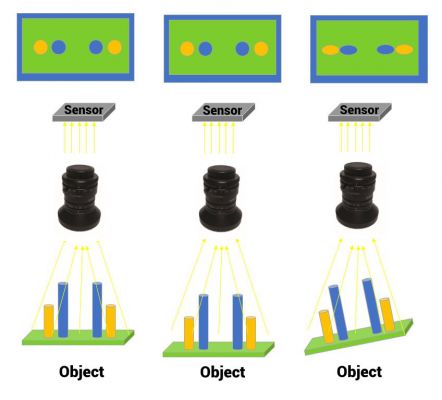 With telecentric optics, the light rays run parallel to the optical axis, the image has no perspective distortions and distances in the image can be measured without errors. The light is directed as if the image is viewed vertically from above, everywhere from the centre to the edges, excluding all perspective errors.

The image scale in the axial direction (Z-direction to/from the camera) within a defined range is the same, i.e., the distances measured in the image do not change when the object is a little closer or further away from the camera.

This means that if a distance between two boreholes is measured accurately, the measured distance will remain the same evenif the object moves, or the object being measured moves closer to or away from the camera.

However, this is not a "carte blance" because the image can still become blurred if the object lies significantly outside of the focus plane.

In principle, it is still possible to measure blurred contrasts with "subpixel accuracy", but the overall accuracy decreases.

However, these good properties of telecentric lenses come at a price. To achieve a parallel beam path, the front lens must be at least as large as the object to be imaged. With small fields of view, the costs do not play a very big role, but with field of view > 5 cm, the lenses quickly become expensive. In addition, they are very heavy, a big disadvantage if the have to be transported on a robot, for example

In our calculators, we have therefore limited the viewing range to 150 mm in width. Of course, there are also lenses with much larger fields of view, but the costs for these are in the 5- to 6-digit range.

What accuracies are possible with endocentricity?

Of course, there is also the possibility to use classic endocentric lenses for cost-effective measurement on large measuring fields, provided certain conditions are met.

In general, it is only possible to measure well in the centre using an endocentric lens. Moreover, the distortion from the centre to the edge is known for lenses. If you could calculate this for each pixel in the image, it would be possible to measure accurately. In addition, the distance to the object simply behaves like a "magnification factor", which is also known for a certain lens. So, let's take our example with the two drill holes: If the distance of teh object to the camera and the distortion are known, the distance could also be measured with a cheap endocentric lens.

How does this work? Quite simply - we calibrate.

Calibration involves using a suitable object to measure the "distortion matrix" of the lens and the tilt relative to the image sensor. This also considers any inaccuracies and aberrations of a lens or, for example, a slight tilt to the image axis. With the help of this "distortion matrix" or a correction model, all pixels in the image are corrected by software and an "ideal" image is calculated. This part of the calibration is called "intrinsic" (inner) calibration.

To calculate the "magnification factor", and also correct a possible tilting of the camera, an additional "extrinsic"(external) calibration is carried out. To do this, however, a measuring plane must be defined. 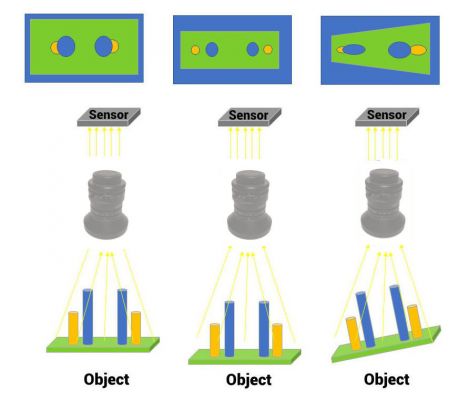 A disadvantage of an endocentric lens is that it does not "see" perpendicular to the image plane everywhere. This means that higher objects, but also objects of the same height that are closeer to the centre of the image, can "shadow or overshadow" parts of the image at the edge. The areas at the edge simply disappear behind the object in the centre of the image, are not recognised and cannot be measured. Especially with lenses that must cover a wide angle or if annobject has areas of different heights, this is a particular problem. Therefore, when using endocentric lenses, one should stay as far away from the object as possible and use high, so-called "tele" focal lengths.

Use of endocentric lenses with backlight illumination 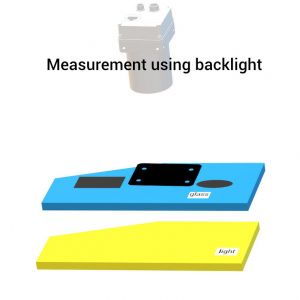 A special case when using endocentric lenses is the "backlight method". Here, only objects that are relatively flat ( < 1 cm object height at a distance od 2-4 m from the camera) can be measured so that the "shadowing" mentioned above remains low. In addition, the height of the object must be know exactly. Objects with a diameter of < 1 m can be measured accurately and relatively cheaply. If necessary, an entire "array" of cameras must be set up to measure the object.

Use of endocentric lenses with front light illumination

Finally, we would like to point out that when using endocentric lenses for measuring in front light, the distance must be known. If you really want to measure at every point, you can extend the system by using a second, also calibrated camera that looks at the same area. Such a system is called a "stereo system". Here you work in 3D on a point cloud and can measure at any place in the image.

In our calculators, the 3D measurement technique is divided into two variants, a "stereo system" and a "triangulation system", which use different methods to calculate the point cloud. 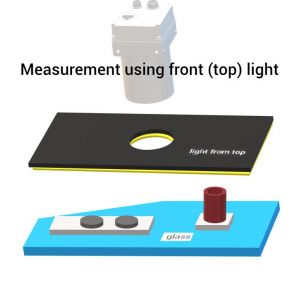 At the beginning we asked ourselves whether precise optical measurement is only possible with telecentricity and the associated relatively high costs. In summary,we can say that for small measurement fields the advantages of telecentric measurement outweigh the disadvantages. For larger measuring fields, it should be considered whterhe the feature disances are know or can be determined with a suitable measuring tool. If so, endocentric measurement can often measure well enough for a fraction of the cost.

What can we do for you?

We would be happy to discuss your ideas and requirements in detail and develop a specialised solution together with you, tailored to your individual needs. 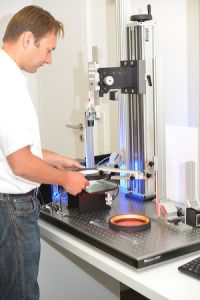 phil-vision GmbH
Zeppelinstr. 5
82178 Puchheim
Germany
This email address is being protected from spambots. You need JavaScript enabled to view it.
+49 89 1250943 50